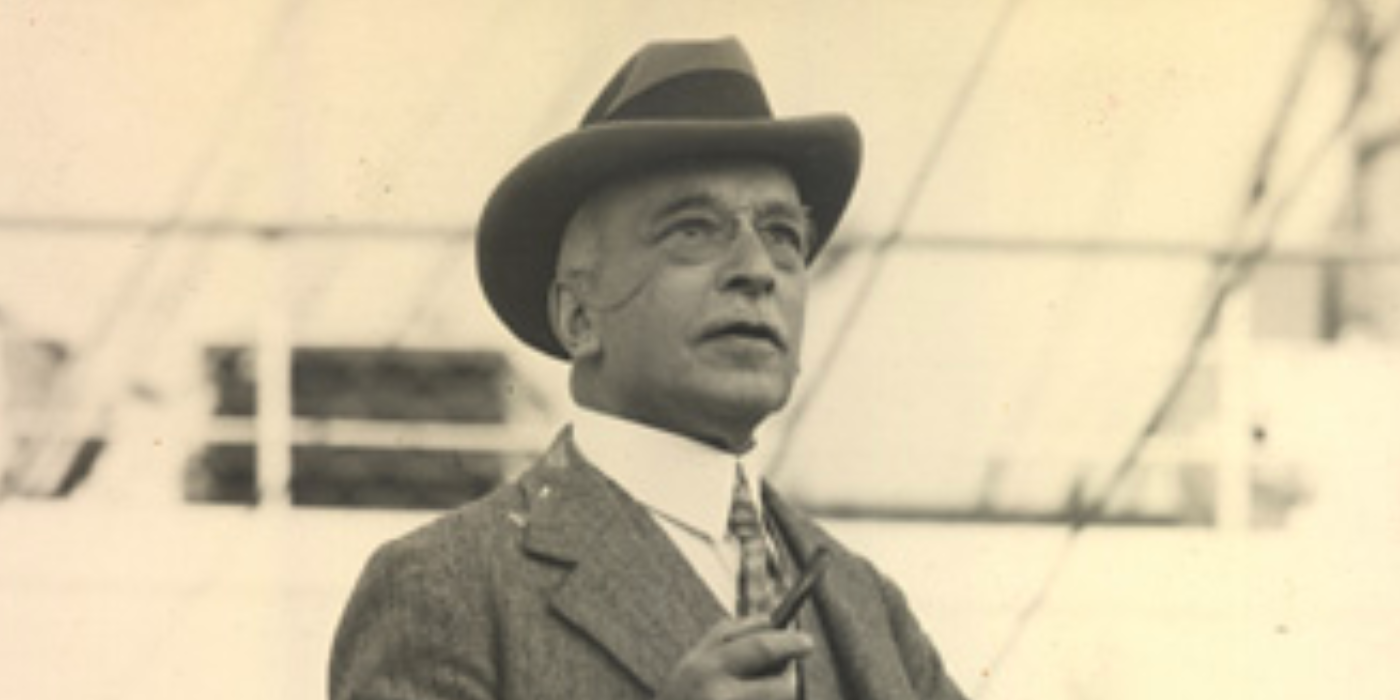 Born September 3, 1860 to German Jewish immigrants, Edward Filene was best known as a fair businessman and the father of the U.S. credit union movement.

Filene attended high school in Lynn, Massachusetts, and worked in his father’s store evenings, weekends, and summers. In 1881, when he was 21 years old, his father William founded a department store in Boston. HE began traveling in the 1880s, purchasing merchandise, studying business practices, and increasingly examining how different societies were organized and the problems they faced.

In 1890 his father became seriously ill. Together with his younger brother Abraham Lincoln Filene, he took over his father’s company and changed it to “William Filene’s Sons Company”, which would later become Filene’s. Though the store did not make a profit for many years, it attracted more customers, and eventually turned a profit, even supporting the main store of Filene’s during the Great Depression.

During Filene’s time at the department store, he was a pioneer in employee relations. He instituted a profit sharing program, a minimum wage for women, a 40-hour work week, health clinics and paid vacations. He also played an important role in encouraging the Filene Cooperative Association, “perhaps the earliest American company union”. Through this channel he engaged constructively with his employees in collective bargaining and arbitration processes.

He drew inspiration from the scientific management ideas of Frederick Winslow Taylor and adapted these ideas for use in the retail environment. Filene is credited with refining a number of under-utilized and in some cases novel retailing techniques. For example, offering to give customers their “money back if not satisfied”.

In 1907 Filene traveled around the world, and by February reached Calcutta, India. There, he visited some rural cooperative banks that had been promoted and funded by the British colonial government. On his return, he contacted his associate Franklin D. Roosevelt and suggested that a similar type of organization be promoted by the U.S. government in the Philippines.

He realized that credit unions could help ordinary American workers to access loans at reasonable rates. Equally important, workers could save their money so that when hard times hit, they were prepared. He formed a savings and loan association for employees which later became the Filene Employee’s Credit Union.

Subsequent to this trip the philanthropy he practiced, combined with the steady implementation efforts of his associate Roy Bergengren were critical to the emergence of credit unions in the United States. He also donated $1 million to the Consumers Distribution Corporation to help them organize a national network of cooperative retail stores.

In 1908, Filene and Massachusetts banking commissioner Pierre Jay, helped organize public hearings on creating credit union legislation in Massachusetts. The Massachusetts Credit Union Act of 1909 was the first comprehensive credit union law in the United States, and would serve as a model for the Federal Credit Union Act of 1934. The two of them also collaborated and brought about the adaptation of the tern “credit union” in the United States. His concern with fighting loan sharks and excessively costly consumer loans led to the choice of the word “credit”, while his interest in working people made him want to cast unions in a more positive light.

Also inspired by his experience in many European countries where credit unions were called “people’s banks”, Filene organized the National Association of Peoples Banks to advance the credit union cause in the U.S. However, little came of this until 1921, when Filene observed in Roy Bergengren the key organizer he needed. Together with Bergengren he founded the Credit Union National Extension Bureau.

In 1921, Filene founded the Extension Bureau, to which he donated nearly $1 million during its 14-year history. It had four goals: to bring about the laws needed for credit union development in the various states, subsequently, to organize some credit unions in each state that could serve as examples to others, to expand the number of credit unions to the point that they could create self-sustaining state federations, and to combine the federations into a self-sustaining national association.[9]: 100

Filene hired Roy Bergengren, and their collaboration and the work of the Extension Bureau proved very effective, bringing state laws to fruition in 26 states and substantially revised flawed legal frameworks in 5 others. In 1934 the Roosevelt Administration passed the Federal Credit Union Act, making it possible to form a credit union anywhere in the United States.

Filene’s lifestyle and motivation for his philanthropic work was described by Bergengren, who knew him for much of his adult life, “He had a great distaste for material things, lived very modestly, never owned an automobile and was scrupulously careful about small expenditures, all because he felt that he was a trustee for the money that he had earned and that the trustee-ship involved turning his accumulations into the greatest possible disinterested public service.”

His death was reported on the front page of every major newspaper in the world. Additionally, Roy Bergengren conducted a series of memorial meetings for credit unionists around the country. The Board of Directors of Credit Union National Association and CUNA Mutual Insurance Company voted to raise funds to build a memorial to their founder. Filene House in Madison, Wisconsin was the result. President Harry S. Truman dedicated the building in May 1950.